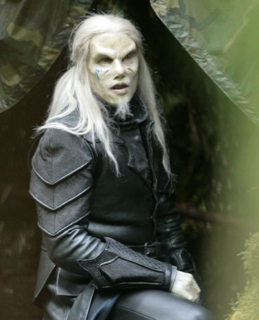 Over the years James has performed or co-ordinated an enormous variety of stunts. Having a martial arts background he has performed and choreographed countless fight scenes. In fact he was called upon to choreograph a fight scene on his very first job as a stunt double for Michael Dudikoff in Cobra. In addition his stunt resume includes “Squibb Hits, High Falls, Explosions, Fights, Rappelling (Standard/Aussie), Window Falls, Precision/Stunt Driving, Basic Horseback Riding, Fire Burns, Rachets, Air Rams, Stair Falls, Car Hits, etc.”

But have you ever wondered what work goes into the stunts we see James or other stuntmen and stuntwomen perform on TV? This past season of Arrow we’ve been treated to the fantastically informative pre-vis stunt rehearsal videos, popular with both fans and TV critics/bloggers. But before Arrow BamBam worked on a little franchise you may have heard of, Stargate. James was the Stunt Co-ordinator on Stargate Atlantis and Stargate Universe, as well as the Fight Co-ordinator in the final two seasons of Stargate SG1. He regularly spent time with Special Features director, the amazing Ivon Bartok, to give fans a glimpse into the preparation that goes into the final stunt we see on screen. Of course James is endlessly quoteworthy, so you’ll see a few of my favourites here.

Anatomy of a Fight – Stargate Atlantis

James leads viewers through a fight scene, from blocking rehearsals with Rachel Luttrel’s stunt double & the stuntmen two weeks before shooting, finishing up with fight day on location.

BamBam: “It helps to reward the stunt people with food”
Over the past few years I’ve sent many Aussie care packages to James – TimTams, Aussie chocolate and gift baskets. A great reward for years of entertainment.

Stunt in Air – Stargate Universe
Colonel Young being propelled through the Stargate in the pilot episode of Stargate Universe was incredible. An amazing ratchet stunt, no pads – wow! This featurette includes James’ directions to all on set, the rehearsal with pads and then the final stunt with no pads.

I was lucky to meet James and Claude on a trip to Vancouver, while they were meeting to discuss a stunt sequence on Alcatraz. It was quite a thrill.
BamBam: “This man here, Claude, is our rigger. He’s gonna be on the button. He’s in charge of not killing Dave….. until the second take”

BamBam: “Let’s not change a thing, except for maybe Dave’s underwear”.

Man on Fire – Stargate Atlantis Season 5 promo
James explains the process he uses to protect his body for the fire burn, including chilling his Nomex flame resistant underwear overnight, wearing clothes treated with NoChar and making sure there is a tight seal on his shoes so that the accelerant cannot get inside.

Fire stunts scare me the most out of all stunts. Every i could be dotted and t crossed, yet on the day a freak change in the wind could cause issues, as it did this day. The wind kept the flames in James’ face and he suffered burns. Glad he’s ok now.

The finished promo appears at the end of the video.

BamBam re fire-retardant underwear: “They’ve been chilling overnight in this cooler. Now I’ve gotta strip naked and uh put these up against my body”

Stay tuned to BamBam’s fansite as  I delve into the archives of his work and share what I can. Meanwhile view more Stargate featurettes with James.

2 thoughts on “He’s in charge of not killing Dave….. until the second take”