Bambam Fans is now on Facebook! On the page we can share news, photos and videos of our favourite stunts of James Bamford, in addition to sharing the articles of this blog.

Now onto February news. If your nickname is Bam please look away… are we all good? OK, then.

Well in case you don’t know it’s Bam’s birthday on February 26th. Mark that on your calendar. Also, it may have escaped your attention that Arrow wasn’t nominated for an Emmy in Stunt Co-ordination last year. For a show with the most original kickass stunts on TV, this is bizarre. I wrote a blog post about it last year – Are the Emmys irrelevant?

HELP US TREND “James Bamford deserves an Emmy” on February 26.

Fans of BamBam would like to honour him on his birthday on February 26 by trending on Twitter “James Bamford deserves an Emmy”.

It starts in Melbourne at 7am (27th Feb). Here’s a few of the converted times around the world:

To convert the time to your city go to:

All you have to do is tweet the phrase James Bamford deserves an Emmy and give a reason why.

James is a brilliant fight choreographer and if you’ve been enjoying his work on Arrow you’ll understand why he deserves this. Feel free to reblog, share the poster via your favourite social media sites. On February 26 stand up and shout “James Bamford deserves an Emmy!” 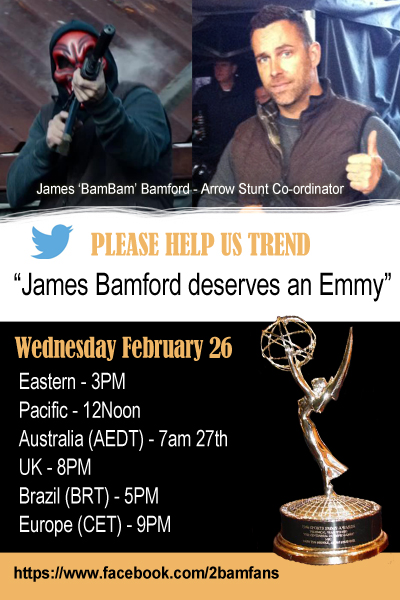