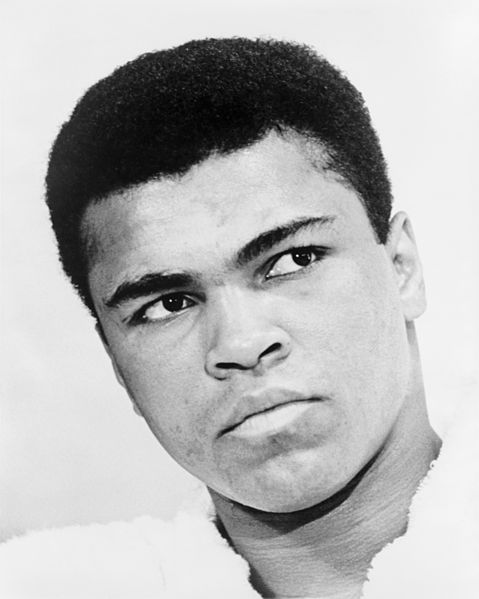 If I could make 3 wishes I wouldn’t wish anything for myself. I’d want to treat my family to a Disneyland trip, show Canada to my Dad and I’d also like to arrange for my favourite guy to meet the boxer who inspires him – Muhammad Ali.

James was born in 1967, the year Muhammad Ali was banned from boxing for refusing the Vietnam draft. Refusing the draft was a courageous decision to stand up for his beliefs. The Government wanted him to serve his country, while he wasn’t even free in that country. Ali was stripped of his title and sentenced to five years imprisonment, although he spent no time in jail. The champion boxer spent three and a half years in exile lecturing in colleges around the US. By 1970, Ali’s conviction was reversed and he was back in the ring.

Muhammad Ali was born Cassius Marcellus Clay, Jr. on 17th January, 1942 (he later converted to Islam and changed his name to Muhammad Ali). As a 12 year-old he had taken up boxing on the advice of a police officer and went on at 18 years old to win the Light Heavyweight Olympic title in 1960 in Rome, defeating Poland’s Zbigniew Pietrzykowski.

Ali is considered by many to be the greatest athlete of all time. He has inspired millions around the world with his words and action. A few quotes that touch me:

“A man who views the world the same at fifty as he did at twenty has wasted thirty years of his life.”

“Age is whatever you think it is. You are as old as you think you are.”

“The fight is won or lost far away from witnesses – behind the lines, in the gym, and out there on the road, long before I dance under those lights.”

“Hating people because of their color is wrong. And it doesn’t matter which color does the hating. It’s just plain wrong.

“I am The Greatest.”

In an interview with Wormhole Riders You Decide, Actor Aleks Paunovic, described him:

“Here’s a guy that not only was a great and beautiful boxer to watch artistically but he did something as a humanitarian. He took his name through boxing to a different level to help as many people as he can.”

When asked why Ali was his role model Aleks said:

“What was a huge influence to me was when he lost his first fight and the reporters couldn’t wait to bash him with questions “I thought you said you were the greatest, you were going to win this fight” and so humbly and calmly he said “Everyone loses. Everyone loses a mother, you lose your father, you lose your dog. Everyone in life loses. How you come back from a loss that makes you a man and a champion. I’ll be back. I know who I am. How do you not look up to a guy like that?”

Ali’s record is incredible with 61 bouts, 56 wins and 5 losses and he fought in an era with incredibly tough competition such as Sonny Liston, Joe Frazier, Ken Norton and George Foreman. His amateur career was equally dominating including 100 wins and 5 losses.

Muhammad Ali wasn’t the strongest punch, his strength was his speed, both his hands and his feet. His style was different to boxers of his era. He danced and circled around his opponent, teasing them to chase him.

Many of his bouts captured the imagination of the world and earned them nicknames: Fight of the Century, The Rumble in the Jungle and Thrilla in Manilla. The rivalries with other boxers such as Joe Frazier were legendary.

Muhammad Ali fought Sonny Liston, a notoriously hard hitter, twice in his career. I had only seen highlights of Ali fights previously. I remember my parents watching and discussing over dinner. So I looked them up on Youtube to see the athlete that inspires James. In the first bout, Liston failed to appear for the seventh round with an alleged torn tendon in his shoulder and Clay, as he was known then, was declared the winner. The 1965 fight in Lewiston, immortalised by the Neil Leifer photo of Ali standing over Liston after the knockout, occurred on May 25th, a year to the day before I was born. Liston spent much of the first round chasing Ali. Mostly body punches, Muhammad Ali easily stepped aside, playing with him until Ali saw an opportunity for a quick right-hand jab to the jaw. Liston dropped like a stone. I actually had to replay the punch to see it, it was that quick. I’m not sure if it landed. If it did it wasn’t hard. Apparently Ali didn’t even know that he hit him. Amazingly the referee didn’t call the fight then, but seconds later once the boxers had continued. Apparently there was miscommunication between the referee and timekeeper who had counted Liston out.

After the second loss Liston had a year off boxing and returned to the ring winning a string of fights by knockout, but just four and a half years later Liston was found dead in his Las Vegas home.

A tougher fight was the first fight between Ali and Joe Frazier, both undefeated. The punches Ali landed on Frazier’s head didn’t drop him so easily. Frazier’s tactic of ducking his head was working in the first round as Ali, who was considerably taller would swing and miss. During the early rounds while they were both trading blows Ali connected with the head, with Frazier landing a lot of body shots.  But Frazier never went down. As the fight progressed, Ali’s fatigue was showing and Frazier dominated the later rounds. The fight went the full fifteen rounds with Ali receiving some massive blows in the 11th and 15th rounds, including one that sent him to the canvas. When all was said and done, the judges and referee awarded the fight to Frazier in a unanimous decision.

The strength of a boxer is not always in the way he wins but, as Ali said, the way he comes back from a loss. The first rematch between Ali and Frazier occurred in 1974, followed by another in 1975 (Thrilla in Manilla). Ali won both bouts.

Ali retired from boxing in 1981 and was diagnosed with Parkinson’s disease in 1984, a disease which took the life of his father. But it hasn’t crushed his spirit. He may not be as fast on his feet, but he puts a smile on the faces of everyone he meets.

Since his early years in boxing Muhammad has used his celebrity to raise money for a variety of charities. He has worked as an ambassador of peace, helping to secure the release of hostages, as well as delivering aid to the needy, visiting soup kitchens and hospitals locally. Each year he participates in Celebrity Fight Night, raising money for the Muhammad Ali Parkinson Center. He’s been honored by Amnesty International with their Lifetime Achievement Award, in addition to the United Nations Messenger of Peace, Presidential Citizens Medal and the Presidential Medal of Freedom. Ali once said, “I’ve always wanted to be more than just a boxer. More than just the three-time heavyweight champion. I wanted to use my fame, and this face that everyone knows so well, to help uplift and inspire people around the world.”

I think James admires both the fierce competitor and the kind humanitarian.