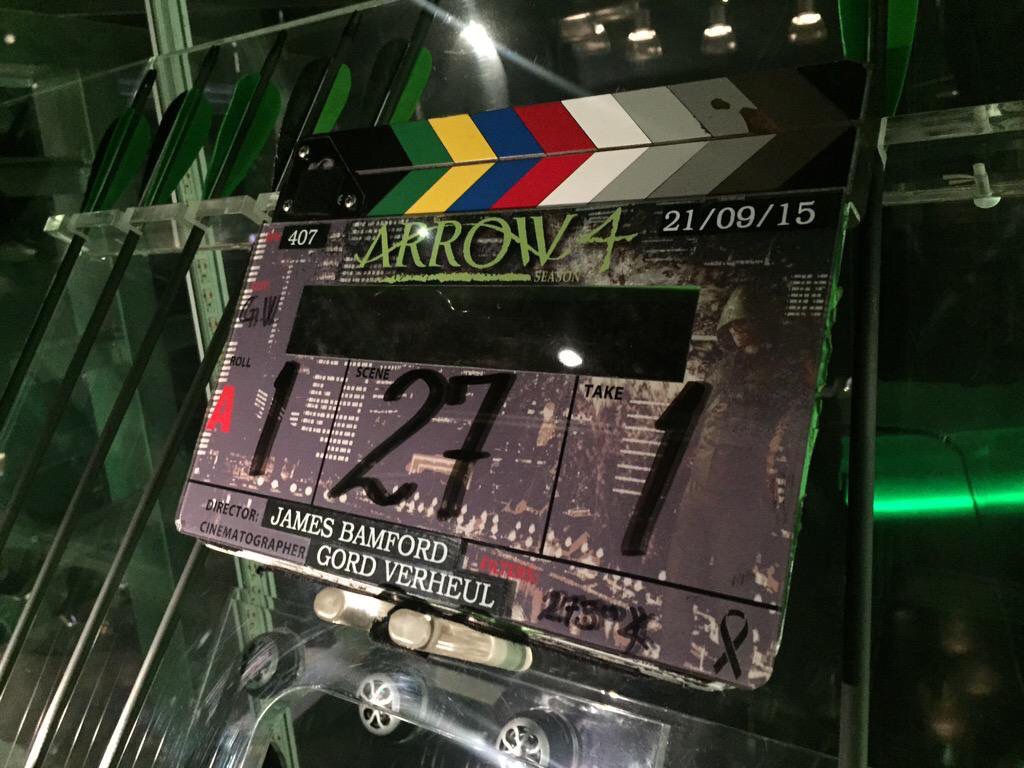 Directing television is challenging, particularly on an action heavy series such as Arrow. With only a week of prep and 8 days total filming, you better be well prepared before stepping on set. Enter James Bamford.

Hanging out with the "Ghosts", on their moment of rest before we roll the camera again….Episode 4.22 #Arrow BTS

I believe offering James a directorial opportunity is one of the smartest decisions the Arrow producers have made.

In this 3-part series I’ll be sharing what I and some of the actors see in the episodes he directs and I’ll even bust some myths along the way.

Perhaps the biggest myth I’ve seen on social media is that James Bamford is “not a real director” because of his stunt background.

There are many paths aspiring directors can follow. Certainly there are university courses, but it’s also possible to learn the art of directing without film school. In fact many of the most celebrated directors did not study film at school – Quentin Tarantino, Stanley Kubrick, Franco Zeffirelli and James Cameron to name a few.

Some learn to direct by shooting short films with friends or through working in the industry in departments such as cinematography, editing, acting and stunts. It’s the last path that James Bamford took, a path also taken by directors Chad Stahelski (John Wick & John Wick 2) and David Leith (John Wick & John Wick 2, Atomic Blonde, Deadpool 2).

Plenty of time on set is spent setting up shots and over the years James Bamford used this time to ask questions and absorb information related to cameras, lighting etc. In an interview with Budomate:

“Aside from shadowing specific directors through time, I’ve spent over 70,000 hours on film sets if you don’t absorb some of the craft after that amount of time you just aren’t paying attention. I’m paying attention. ”

James Bamford The Man Behind the Fight Scenes on Arrow – Budomate

James is a full member of the Directors Guild of Canada with over 25 years on set education. The DGC certainly consider him a “real director”.

Fresh view to an established show

Stephen Amell recalled a meeting with Arrow Executive Producer, Greg Berlanti, where the EP explained that television series often have a renaissance after 4 or 5 seasons due to the input of one person with a fresh view. Stephen believes that for Arrow, James Bamford is that person.

I feel James’ episodes have a cinematic quality to them. The stunts are more ambitious and look more expensive than one would usually expect on a television show. A great example is the 80 foot motorcycle jump over a town car and under a bridge in Code of Silence. That stunt earned a Best Stunt nomination for a UBCP/ACTRA award for rider Leif Havdale, doubling for the Green Arrow.

Other favourites include the Elevator Fight and Blue Light Fight which I will discuss later.

Hero shots, like the establishing shot of Black Canary standing on the roof of the theatre in Code of Silence have a grand feel, the type one would usually see on a cinema screen. They utilise the set or location well.

Scenes from some of James Bamford’s episodes